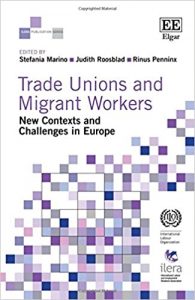 This timely book analyses the relationship between trade unions, immigration and migrant workers across eleven European countries in the period between the 1990s and 2015. It constitutes an extensive update of a previous comparative analysis – published by Rinus Penninx and Judith Roosblad in 2000 – that has become an important reference in the field. The book offers an overview of how trade unions manage issues of inclusion and solidarity in the current economic and political context, characterized by increasing challenges for labour organizations and rising hostility towards migrants. 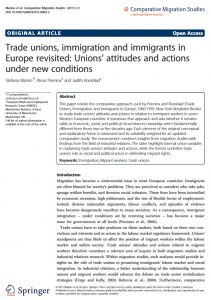 This paper revisits the comparative approach used by Penninx and Roosblad (2000. Trade Unions, Immigration and Immigrants in Europe, 1960-1993. New York: Berghahn Books) to study trade unions’ attitudes and actions in relation to immigrant workers in seven Western European countries. It reassesses that approach and asks whether it remains valid, as economic, social, and political circumstances nowadays seem fundamentally different from those two to five decades ago. Each element of the original conceptual and explanatory frame is reassessed and its suitability weighed for an updated comparative study. The reassessment combines insights from migration studies with findings from the field of industrial relations. The latter highlight internal union variables attitudes and actions, while the former underline trade unions’ role as social and political actors in defending migrant rights.